HomeUncategorizedDonald Trump melts down on Truth Social over Cassidy Hutchinson’s Jan. 6 testimony
28 Jun
0
This post was originally published on this site 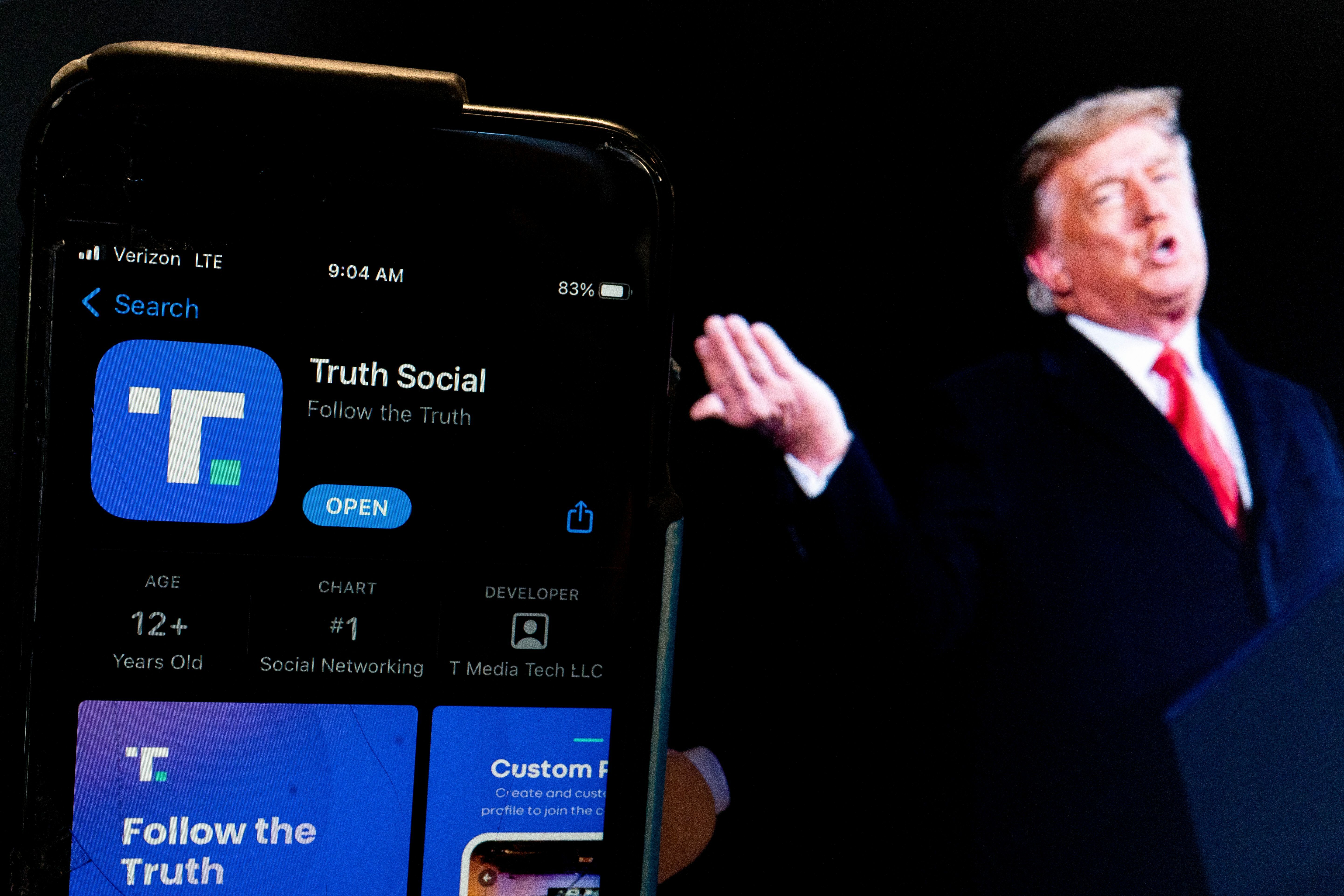 Just when you thought you knew everything there was to know about the January 6 attempt to overturn the 2020 presidential election results, some new revelation comes along.

But this last-minute bombshell testimony from Cassidy Hutchinson, a former top aide to Trump’s chief of staff Mark Meadows, is unlike anything we’ve heard before.

And the former president is none too happy with what Hutchinson shared to the Select Committee and the public, if his posts on Truth Social throughout the televised hearing are any indication.

“I hardly know who this person, Cassidy Hutchinson, is, other than I heard very negative things about her (a total phony and “leaker”)…” posted Trump on his social media platform in his first of a dozen rants. “She is bad news!”

During Hutchinson’s testimony on Tuesday, we discovered that Trump apparently urged the Secret Service to remove the metal detectors from the area where he was giving his speech on the morning of Jan. 6. The attendees were, after all, his supporters, and Trump said they were “not here to hurt me,” Hutchinson testified. 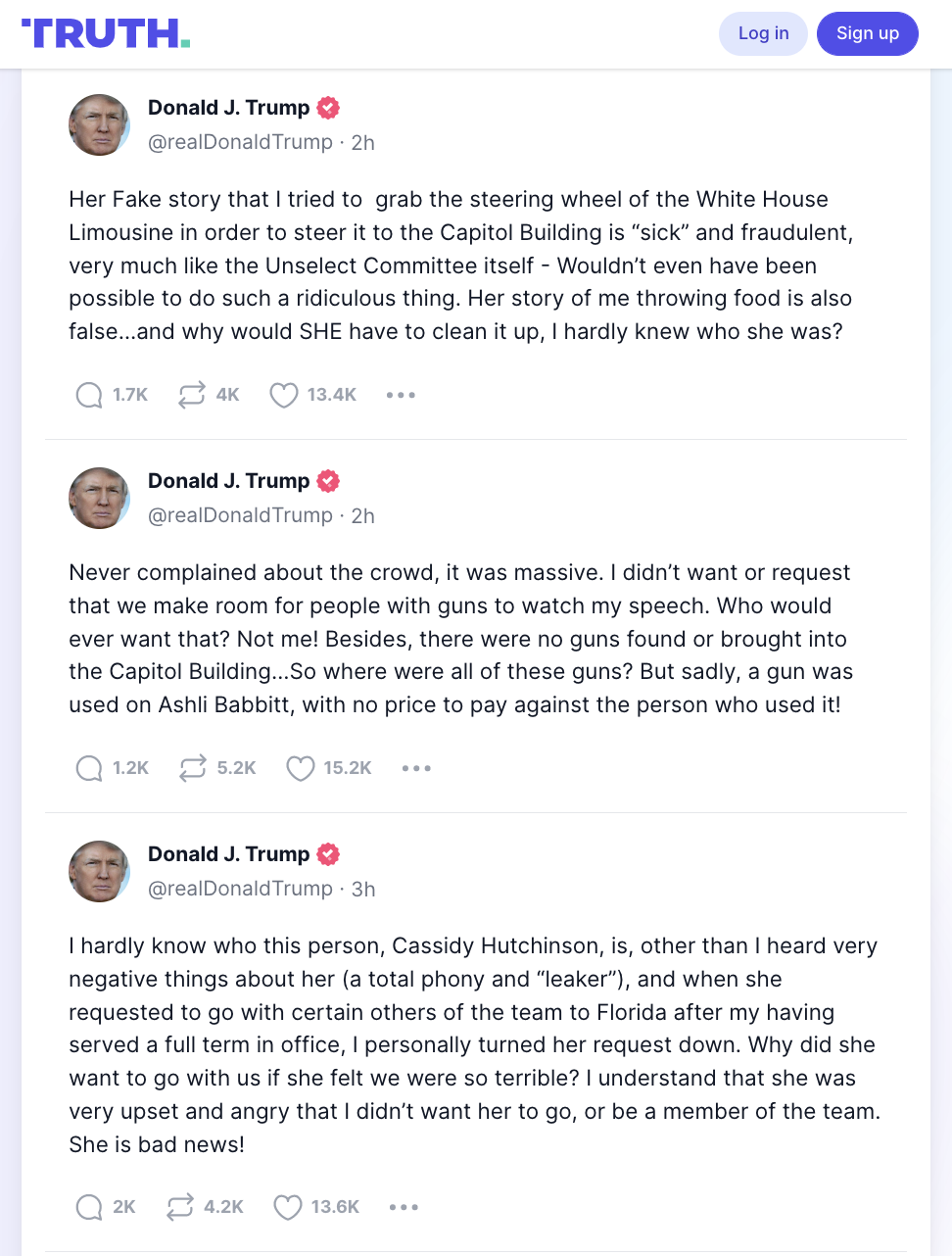 “I didn’t want or request that we make room for people with guns to watch my speech. Who would ever want that?” he posted on his social network, which he only started using last month. “Not me! Besides, there were no guns found or brought into the Capitol Building…So where were all of these guns?”

However, Trump’s defense is incorrect. A number of his supporters were found to be carrying firearms while storming the Capitol that day and are being charged accordingly. Other Trump supporters were carrying knives, bats, and other weaponry that day too.

Hutchinson also testified that Trump had apparently thought he was going to be escorted to the Capitol building on Jan. 6, to join the rioters after his speech had finished. Once he got into the presidential limousine, he found that the Secret Service were refusing to let him go. Irate, Hutchinson said Trump then lunged for the limo’s steering wheel and scuffled with his security.

The former top White House aide also says she was privy to interesting tidbits that occurred prior to the events of Jan. 6. In December 2020, Trump became so enraged after finding out that then-Attorney General Bill Barr dismissed his election fraud claims that he threw his lunch at the wall, she testified. Hutchinson found a shattered plate and ketchup dripping down the wall in the White House dining room.

So Trump shared responses on Truth Social to those portions of Hutchinson’s testimony as well.

“Her Fake story that I tried to grab the steering wheel of the White House Limousine in order to steer it to the Capitol Building is ‘sick’ and fraudulent, very much like the Unselect Committee itself,” wrote Trump. “Wouldn’t even have been possible to do such a ridiculous thing.”

“Her story of me throwing food is also false…and why would SHE have to clean it up, I hardly knew who she was?” he continued. 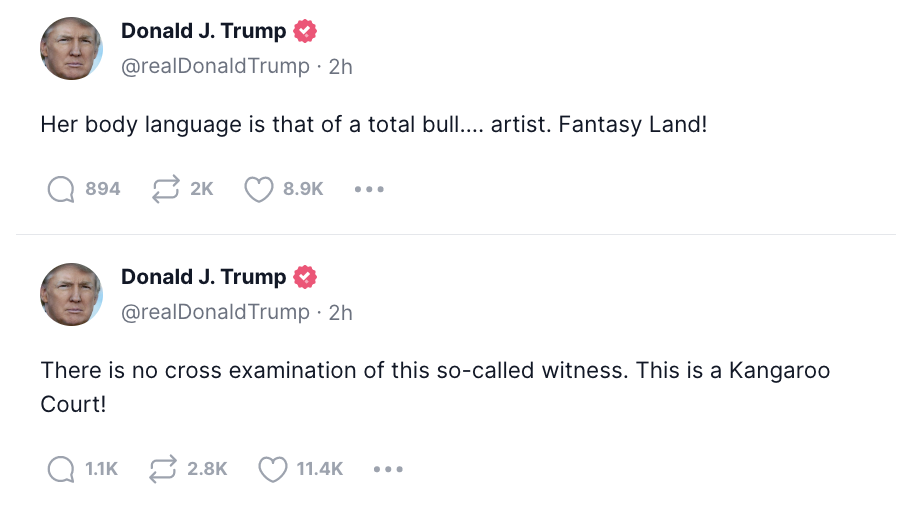 “Her body language is that of a total bull…. artist. Fantasy Land!” posted Trump.

“A Total Phony!!!” he said in another Truth Social post.

The 45th president also denied saying that his vice president, Mike Pence, “deserved” to be hanged for not helping Trump overturn the 2020 presidential elections which he lost to the current president Joe Biden.

Trump proceeded to call the hearing a “Kangaroo Court!” because there was no “cross-examination of the witness.” It’s important to note that this is not a trial. Also Trump and the Republican Party have refused to take part in the hearings.

All-in-all, if you wondered what Trump’s behavior would’ve been like on Twitter during these hearings if he wasn’t banned, Trump is showing you right on Truth Social: pejoratives and trash talk with some classic Trump-isms peppered in. But being that its on his own social media platform, he’s now monetizing it as well…at least while he can.

A federal criminal investigation is currently threatening the merger deal between Trump’s social media business and Digital World Acquisition Corp. (DWAC), a publicly-listed shell company. The merger would essentially fast-track Trump’s business into becoming a publicly traded company. DWAC’s shares have plummeted based on the news.

Between the Jan. 6 Select Committee and this investigation, expect more angry tweets…err…”truths” from Trump in the near future.